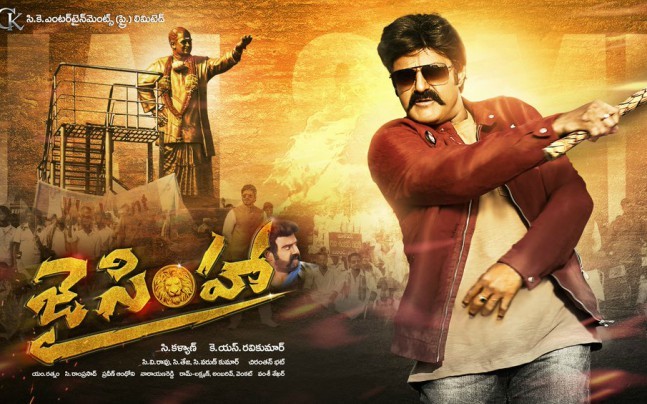 Jai Simha, the latest film by director KS Ravikimar, is out in the theatres on 12th January, and the much-awaited film of 2018 from the Telugu industry is continuing to create hype. Let’s take a look at the details regarding the latest updates on Jai Simha:

The film has earned an amount of Rs 38.50 Cr. as a result of the business before the release. And, while this is considered as decent business, it has not been able to topple the record of Paisa Vasool, the last film by Nandamuri Balakrishna, which managed to earn Rs. 46 Cr. Jai Simha’s earnings include Rs 23.50 Cr. from Telangana and Andhra Pradesh’s theatrical rights from the distribution rights of the film for the other theatres in the world. Its earnings from international distribution rights amount to Rs. 27 Cr, with Rs. 7.50 Cr. from television rights, as well as Rs. 4 Cr. from other rights, including its music.

Even before the film, C. Kalyan, the producer of the film, was in a position to be happy about,with the satellite rights in Telugu and the dubbing in Hindi fetching a massive amount of Rs. 15. Cr., from a major channel. This helped to cover a major section of the investment of Rs. 30 Cr. in this big-time entertainer. A distributor of Hindi films said that the channels that showcase Hindi entertainment programmes love to acquire the acton movies in Telugu, and do not hesitate to pay a fortune for such films. This film’s Hindi channel procurement has brought one of the biggest prices in the career of Balakrishna. Even though Paisa Vasool was not a big hit, it still led to great hype before the release of Jai Simha.

Jai Simha is the second film by Balakrishna which has been released on Sankranti, after Gautamiputra Satakarni. Balakrishna believes that being released on Sankranti, this movie will be the perfect way from Telugu film lovers to celebrate the festival. While speaking about the film, he said that it has all the nine emotions, or as they call it, the navarasas, and added that film buffs will be able to enjoy the movie with all the members of their family. The film is named after the 1955 movie made by his father, and he is proud that the same name has been used. He hopes it will be as much of a success as the original one.

The film showcases the ladies, i.e. Natasha Joshi, Hariprriya and Nayantara, in extremely glamorous ways. As it has been seen in the teasers or trailers, their oomph is one of the main attractions in the film, and a big reason to watch the film on the big screen. Nayantara will be playing a meaty character. The remaining actresses, on the other hand, will be adding a touch of beauty and glamour to this commercial film.

Balakrishna has two avatars in the newly released movie. It was revealed right during the time of promotions that the story has two time periods, with a flashback episode. One of the looks of Balakrishna on the posters is from the flashback time, in which he is clad in a traditional white kurta. The other look is more of a modern casual look, with checks on his shirt which he wears in a street-style. It is also understood that Nayantara is part of the flashback part of the story.

During the pre-release interview at Hyderabad, Balakrishna mentioned that he is extremely excited to work with Ravikumar. He said that the two have been planning for a work together for a long time – for eight long years, to be precise. And finally, this film gave them the opportunity to collaborate with each other. Despite their plans for eight years, their plans to work together have fallen through because of various reasons. However, they are both excited that it is finally happening, and that their first project is a family movie which is releasing on a festive occasion.