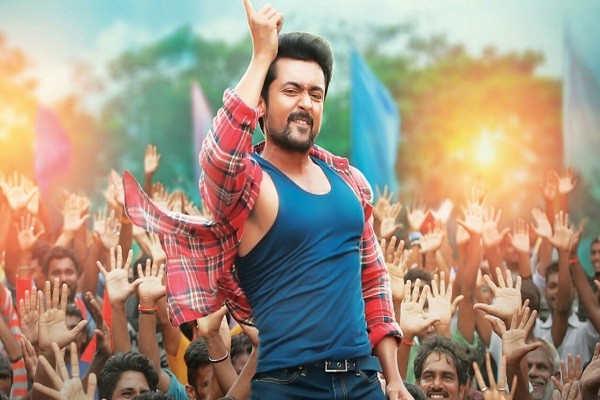 Telugu movie Gang, starring Suriya, has hit the theatres on 12th January 2018, amidst all the hype around the movie. Let’s take a look at the updates and other details regarding the movie.

The Tamil movie Thaana Serndha Koottam has been dubbed in Tamil to create Gang. It is based on Special 26, the Bollywood movie starring Akshay Kumar and Anupam Kher among others. The South Indian movie has Suriya as the male lead, alongside Ramya Krishnan and Nandan among others in meaty roles. Vignesh Shivam has directed the film, while K.E.Gnanavel Raja has produced it under the banner of Studio Green, while UV Creations has produced the Telugu edition of the film, with Pramod and Vamsi as the producers.

The film ran into some controversy when there was a dispute regarding remake rights. Shanthi Thyagarajan, mother of Actor Prashanth, had claimed that the acquisition of the remake rights of Special 26, but a case was filed against the release of the film anyway. The production house went into an agreement back in the month of September ’16, had taken the rights for remaking the film in Tamil, with the validity of the agreement lasting for a year. However, the film could not be completed during the first year. But the Madras High Court has allowed the release of the film in both the regional languages, thus putting an end to the controversy.

Suriya, the leading male in the multi-lingual film, Gang, who is all ready for the release of the movie, recently gave a pre-release interview, in which he thanked actor Prabhas for his help with the release of the movie. Gang released on 12th January, which is the Sankranthi, and as a result of the festivities, it was difficult for the movie team to get theatres. However, the release was possible with smoothness because of Prabhas’ help. And now, the viewers of Telugu movies will be able to enjoy the movie during the festive season, and this is also likely to help the film earn some big bucks.

Suriya and the team of Gang

In the film, Suriya shares screen space with Keerthy Suresh, his romantic interest in the film, as well as actors such as, Brahamanandam, Suresh C. Menon, Anandraj, Balaji, Nandha, Ranya Krishnan and Karthik. Vignesh Shivan has directed the movie, while Dinesh Krishnan has been the cinematographer. Sreekar Prasad handled the editing. The music was composed by Anirudh. The star recently said in an interview that he is quite excited to work with the team. He seemed particularly excited to work with Ranya Krishnan and Karthik, both incredibly talented stars of the film industry.

An original case in 1987 is the inspiration behind the film Gang, in which is about a group of men impersonating government authorities of the IT and the CBI, and raiding people and places, falsely. Suriya plays the role of Tilak, a man who is frustrated because he is unable to crack the job opportunity in the CBI. So, he creates a group, with the help of Jhansi Rani, played by Ramya Krishna, along with some others, and as an act of vengeance, they start faking raids. When the actual CBI offers realize this, they start chasing the group. The story continues, and reveals whether they manage to catch the gang.

A commercial film, Gang’s storyline is definite and valid, being based on a real case. Even though it is a remake, the film is quite different from Special 26, and creates its own impact and feel, with the screenplay by Vignesh Sivan playing an important part in it. It is not like the other commercial flicks, and its execution is logical and hence believable, with its main focus on corruption, an issue that’s prevalent in the society for a long time. Besides having a relevant plot, the film is based on revenge, which makes the movie a perfectly interesting tale. However, as a film on heist, it could do with more elements of thrill in the climactic sequences. However, it is quite an entertaining film. One thing is for sure: the film is not a total rip-off of Special 26, with some major differences in the way the story progresses, and thus, there’s hardly any place for comparison. The performances are really worth watching.