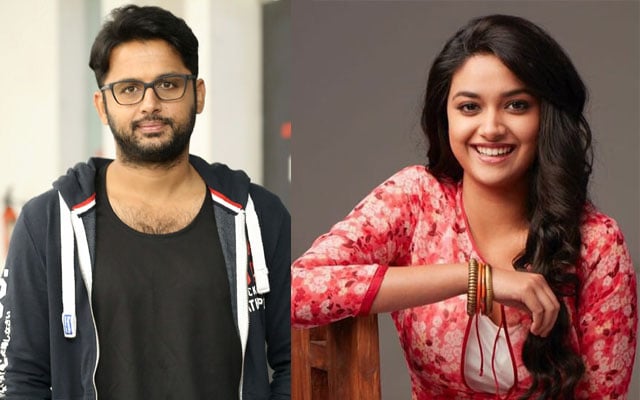 Check is an upcoming Telugu movie releasing in theatres on 26th of February.  Keerthy Suresh who was Nithin’s co -star in Range de took to social media platform and wished him good luck.

Check is an upcoming action thriller Telugu movie, directed and written by Chadra Sekhar Yeleti. The film also stars Rakul Preet Singh and Priya Praksh Varrier in lead roles. The Telugu upcoming movie is expected to release in theatres on 26th of February. With covid protocols slowly going back, theatre owners are seeing a ray of hope in 2021. Many movies are expected to make their mark of release in this year. One such Telugu movie Check is also in that.

Keerthy posted a video of her playing chess with the cast of Rang De – Vennela Kishore and Venkyatluri. They were having a gala time playing the game. In one part of the video, Vennela Kishore sat on the floor to play the game, Keerthy emphasized saying that it was chess that they were playing and not snooker. Later, Vennela Kishore defeated Venkyatluri and went on to scream “Out” in happiness. Keerthy explained to him that it is not called “Out,” but “Check.” Actor Nithiin also appeared in the video and then, Keerthy addressed the audience saying that Check will be releasing on February 26 and urged them to watch the film at the theatres. She said, “Team Rang De wishes Team Check All the very best.” In her caption, Keerthy wrote, “Presenting chess masters @vennelakish and @venky_atluri Here’s wishing team #Check all the very best for their grand release @actor_nithiin @priya.p.varrier @rakulpreet #ChandraSekharYeleti @kalyanimalikofficial @bhavyacreationsofficial.” Fans and followers rushed to the comments section to pour in love and good wishes for Check.

Lets hope to see  how the this action thriller Check Telugu movie does in theatres. Watch the movie in theatres near you but do not forget to follow covid protocols at all times.