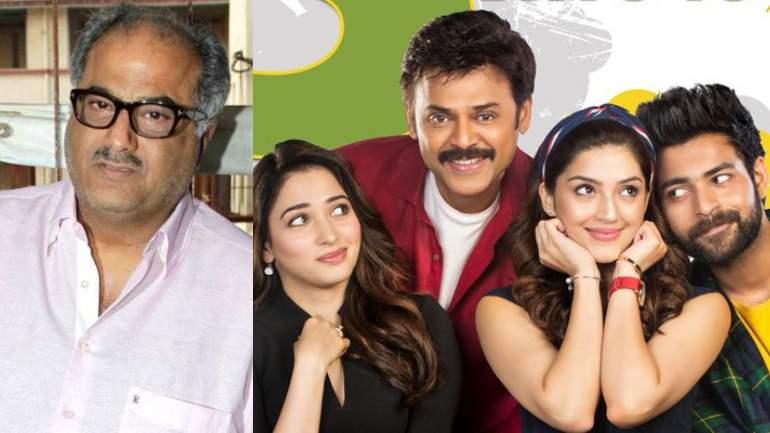 A number of south Indian movies have been remade and have had a wonderful run in Bollywood in the recent times. Now, another movie is being added to this list. The Telugu comedy movie F2- fun and frustration is going to be remade into hindi being produced by Boney Kapoor.

The original movie F2- fun and frustration was a comedy thriller about relationships and marriages. The movie had featured stars Venkatesh, Varun Tej, Tammannaah Bhatia and Mehreen Pirzada in the lead roles. The movie had been a big hit at the box office. The movie had been written and directed by Anil Ravipudi and produced by Dil Raju. Venkatesh had said that he had got into the comic genre after a long gap. The movie was made on a budget of 30 crore and had gone on to enter the 100-crore club. The movie had received a collection of mixed reviews from the critics. The making of the sequel of the movie has already been announced by Dil Raju and Anil Ravipudi which will be titles F3. The music of the movie was done by Devi Sri Prasad.

The movie revolves around the lives of the two men, one of them who has already been married and another one of them who is about to get married. Boney Kapoor too confirmed the news to a daily. Boney Kapoor said that he thoroughly enjoyed watching the movie. He was of the opinion that the movie F2 is a fun film and a family entertainer . He was confident the subject of the movie shall resonate with the hindi audience too. Boney said that it was Dil Raju who suggested him that the movie remake be made in hindi. He described it as the coming together of two passionate filmmakers.

The remake in Hindi will be directed by Anees Bazmee . Annez Bazmi is well known for directing comedy entertainers. There have be doubts in the minds of movie buffs as on who will be playing the roles done by Venkatesh and Tammannah Bhatia.

Aneez has to his credit comedy blockbusters such as No Entry, Welcome among others. Boney Kapoor said that Anees has always excelled at fun subjects as a writer and director and that both of them did have a good Rapport, making him the most obvious choice for the movie.

Trade analyst Taran Adarsh was the one who broke out the news of the remake being done. He took to twitter to make the announcement. The actors in the remake are yet to be announced. With the Direction by Anees and the fun story, the movie is going to be one comedy masterpiece.

Boney Kapoor will also be remaking the Hindi Movie Badhaai into several South Indian languages. The Hindi movie had struck a chord with people across the country.Boney Kapoor believes that the movie movie will resonate very well with the people in the south too. The tamil remake of the movie Pink will star Ajith playing the role played by Amitabh Bachan. The movie has been titled Nerkonda Paarvai.