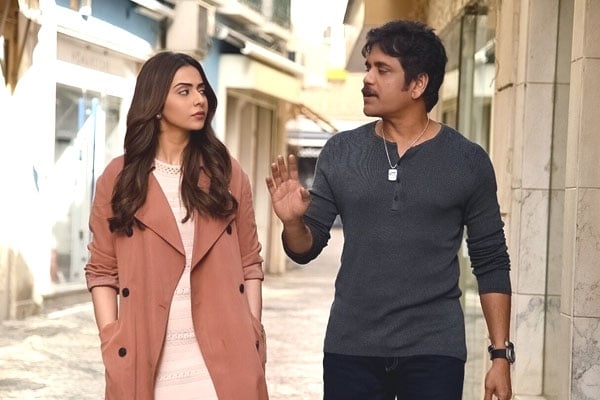 Manmadhudu 2 belongs to Nagarjuna. He is the main driving force behind the movie. Nagarjuna’s performance was simply good, he did very good justice to the character, great sparks shown, Nagarjuna even looked quiet young and handsome in the movie. Rakul Preet, Manmadhudu 2 female protagonist was also beautiful to look at. Rakul did quiet a good justice towards her role. The chemistry between Manmadhudu 2 lead actors was good to look at. Rao Ramesh and Laxmi did great justice to their roles, they were very natural in their characters. Jhansi and Devadarshini were not spectacular but severed their roles in a good way. Manmadhudu 2 cameos of Samantha, Akshara Gowda grabbed quite a few eye balls amoung public. People also loved the cameo of Keerthy Suresh.

Manmadhudu 2 director Rahul Ravindra did not do any justice with direction. Manmadhudu 2 director was unable provide a fresh romantic story with good direction just like his earlier movie. Manmadhudu 2 story was very lame and unimpressive. It was so boring that Telugu movie goers. The production cost of Manmadhudu 2 was quite good. The shooting locations of Portugal looked ravishing everywhere. The music of the film was poor, Manmadhudu 2 music failed to create any cord with movie goers. The audio was also not at impressive but the background music good. The Manmadhudu 2 Telugu movie cinematography was actually not bad. It did good justice with location shots and many more aspects.

Although Manmadhudu 2 was poorly done, but for Nagarjuna fans there is only one bliss, Nagarjuna’s acting. Apart from that Manmadhudu 2 has nothing impressive to talk about and to recommend the movie goers. It’s up to the movie lovers to decide whether they can take the boring unimpressive script.