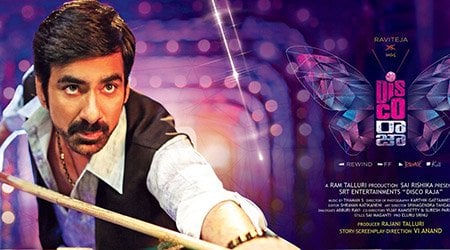 Disco Raja Telugu movie is coming to Telugu theaters on 24th of January. This Ravi Teja starrer sci-fi movie is the first movie to hit the screens after the big Sankranti clash in the Telugu box office. On the movie front, Ravi Teja has not seen great success for quiet along period of time. Although his comic timing is as good as any big comedy actors in Indian film industry still he has been missing out to get that punch in box office. Disco Raja Telugu promotions are seeing quite a good response, although many were awry about why Disco Raja trailer release was so late, but it was all well appreciated.

To speak about Disco Raja Telugu cinema, Vi Annad, Disco Raja director, had said in a promotional even that the Disco Raja plot was there in his mind since ten years ago, but the concrete ideas fell in one and half years ago.  The director also promised that there will be many entertaining elements to give the perfect treat for the cine goers for Disco Raja.

In Disco Raja, Ravi Teja performance was spectacular. He has given his all-out acting performance by giving due diligence to character needed. To speak about the newness in the character there was some extra amount of swag element involved and also new setting and get up to give the character and extra light. But apart Ravi Teja’s full on high octane energizing performance, the swag element was not something that can get audience hooked to the screens to make the movie great entertainer.

The Disco Raja movie has a very routine level of entertainment, where comedians comes and goes, giving some punch lines. The interval point was big letdown by many film critics. It has been said that the gradual progress of the movie, made very predictable of what the climax would be and the film just produces that. So, instead of getting audience hooked to some thrill it was a very usual scene. The second half of the movie was set against retro theme with sci-fi action. Thus, from a gangster based story it quickly swapped to a romantic love story.

Disco Raja actresses, Nabha Natesh, Payal Rajput and Priyanka Jawalkar were casted to share space with Ravi Teja at various sections of the movie. Allari Naresh is also a part and is said to have a very integral part in the movie t. Impressed over the way his character has been shaped up, Allari Naresh agreed to join the star cast, confirm sources. Ram Talluri is bankrolling this film under his banner.

Disco Raja Telugu movie ratings are coming in lately, mostly have mixed to average likability. The Disco Raja box office collections need to be watched out to see how the movie dies. It will be only the audience who can say whether this movie by mass entertainer Ravi Teja will do good in box office or not.